Caroline Copeland is one of the leading specialists in Baroque dance and performance practice in the USA and her extensive career has brought her to theatres, palaces, and universities across the United States and Europe. As a solo performer, Caroline has collaborated with many early music groups including Merz Trio, Quicksilver, The Four Nations Ensemble, The New York Collegium, Brooklyn Baroque, Bourbon Baroque, The New Dutch Academy, The New York Consort of Viols, Cantata Profana, Julliard415, New York Baroque Incorporated, and Capriccio Baroque.  Ms. Copeland is an Associate Director of The New York Baroque Dance Company where her most notable appearances include performances at the Drottningholm Theater in Sweden, the International Händelfestspiele Göttingen, Danspace at St. Mark’s Theater, the Guggenheim Museum, and at Potsdam Sanssouci. Caroline has also appeared as a featured artist in nine productions with the Boston Early Music Festival and has performed with the Metropolitan Opera, The Bronx Opera, and with the Nordic Baroque Dancers at the Innsbruck Early Music Festival in Austria.

Caroline continues to keep both feet in the worlds of early and contemporary dance practice. As such she creates choreographies that blend contemporary and baroque dance styles with her research of period treatises, scholarly articles, and memoirs, integrating spoken text and period acting techniques into the performances. Those works include two solos, An Analysis of Beauty and Marais, trois danses; both are virtuosic displays of baroque and contemporary dance seamlessly intertwined, and three group pieces, An Elegy for Rose, Figure Dances, and Convention/Invention: Explorations of Early Ballet.

Ms. Copeland teaches master classes in baroque dance and gesture to all populations: musicians, professional dancers, and the general public.  Notable appearances include NYU Gallatin, Rutgers, Cornell, Yale, Ensemble ACJW, Juilliard, Parson's School of Design, BEMF, University of Delaware, Carnegie Hall and Vassar College. She has also created special classes for children that share a bit of the history and joy of social dancing in the 17th and 18th centuries. These presentations were presented at the Family Day at Carnegie Hall in Manhattan and in public schools throughout the USA.

Caroline earned a MFA in Dance from Sarah Lawrence College and is an Adjunct Professor at Hofstra University where she enjoys teaching classical ballet, contemporary dance, historical dance practice, and dance history. 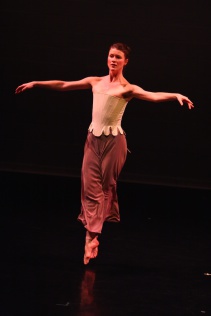